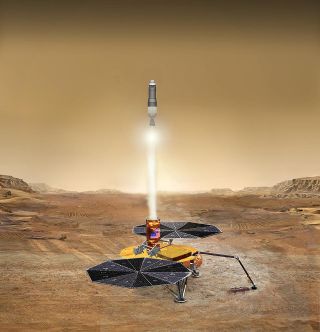 The first pristine pieces of Mars won’t be coming down to Earth for at least another decade, but the time to start preparing society for the epic arrival is now, scientists say.

NASA’s 2020 Mars rover is scheduled to launch in July of this year and land inside the Red Planet’s 28-mile-wide (45 kilometers) Jezero Crater next February. The six-wheeled robot will do a variety of work once it gets there, but its headline task is hunting for signs of ancient Mars life. ADVERTISING

Mars 2020 will do this on the ground in Jezero, which hosted a lake and a river delta billions of years ago. The rover will also collect and cache promising samples for eventual return to Earth, where scientists in well-equipped labs around the world can scrutinize them in exacting detail for any evidence of Martian organisms.

NASA and the European Space Agency (ESA) will work together to get those samples here. The current plan, which is not yet official, envisions two key launches in 2026. These will send ESA’s Earth Return Orbiter (ERO) and NASA’s Sample Retrieval Lander (SRL) mission toward the Red Planet.

ERO will make its way to Mars orbit, whereas SRL will drop a stationary lander, the ESA-provided Sample Fetch Rover (SFR), and a small rocket called the Mars Ascent Vehicle (MAV) near the Mars 2020 landing site.

The SFR will pick up the cached Mars 2020 samples, which will be encased in sealed tubes, and haul them back to the MAV. Mars 2020 may store some of its samples on its body; if that’s the case, the NASA rover could roll over to the MAV and make a deposit as well.

The MAV will then launch into Mars orbit, where it will deploy the container harboring the samples. The ERO will pluck this precious cargo out of the void and haul it back toward Earth, jettisoning the container once our planet is in the crosshairs. The samples will land here in 2031, if all goes according to this preliminary plan.

This touchdown will be a momentous occasion. Engineers will glory in the tremendous technological achievement — we’ve returned samples from the moon, but that’s quite a bit closer to Earth — and scientists will revel in the chance to learn a great deal about ancient Mars and, perhaps, find out whether Earth life is alone in the universe.

(Researchers have examined Mars material before: meteorites blasted off the Red Planet by asteroid or comet strikes that ended up landing here on Earth. But those Mars rocks aren’t pristine — they endured trips through two planetary atmospheres and lots of time in deep space — and they weren’t specially chosen for their potential to host evidence of life.)

The public will doubtless be excited, too. But if the arrival catches folks off guard, there will probably be considerable fear, anxiety and confusion as well, said Sheri Klug Boonstra of Arizona State University’s Mars Space Flight Facility. So, the members of the international Mars sample-return team need to start educating and engaging laypeople about the effort now, said Klug Boonstra, a science-education specialist who’s the principal investigator of NASA’s Lucy Student Pipeline and Competency Enabler Program.

“The public has to be a major part of the equation,” she told Space.com last month at the annual fall meeting of the American Geophysical Union in San Francisco, where she gave a presentation on this very topic.

For example, some people will likely worry that the samples could harbor some sort of infectious microbe that could get loose and unleash a deadly plague on humanity. The sample-return team has thought about this remote possibility, of course, and is doing its best to ensure it could never come to pass.

After arriving on Earth, the Mars material will first be vetted at a specially constructed Sample Receiving Facility, which will be designed to prevent contamination in both directions: Nothing unwanted can get in to taint the samples, and nothing from the samples can get out into the wider world. The SRF hasn’t been built; indeed, a site for it hasn’t even been chosen yet. But the sample-return project can use existing Biosafety Level 4 labs — the most secure ones, which keep nasty viruses such as Ebola from spilling out — as a baseline, team member Tim Haltigin of the Canadian Space Agency told Space.com at the AGU meeting.

The public needs to know that such safety measures will be taken, Klug Boonstra said. And it’s also important to get across the potential scientific bounty represented by those little tubes of Mars material, she added.

The sample-return team is still working out what engagement strategies to employ. Klug Boonstra said the project would like to organize some opt-in focus groups to learn which tacks to take — for example, if activities in schools would be particularly useful in getting the word out.

And that needs to start happening soon, she stressed. It could well take a decade to get Mars sample return fully socialized, especially since our society seems to be getting less science-literate and more sound-bite-driven.

“We don’t want to be in the position where we’re just getting the information out when the public hears that the rocks are coming back,” Klug Boonstra said.