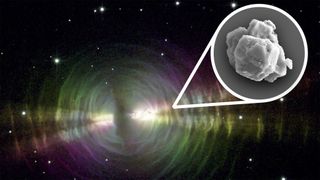 Scientists recently identified the oldest material on Earth: stardust that’s 7 billion years old, tucked away in a massive, rocky meteorite that struck our planet half a century ago.

This ancient interstellar dust, made of presolar grains (dust grains that predate our sun), was belched into the universe by dying stars during the final stages of their lives. Some of that dust eventually hitched a ride to Earth on an asteroid that produced the Murchison meteorite, a massive, 220-lb. (100 kilograms) rock that fell on Sept. 28, 1969, near Murchison, Victoria, in Australia.  ADVERTISING

Though the universe abounds with floating stardust, no presolar grains have ever been found in Earth’s rocks. That’s because plate tectonics, volcanism and other planetary processes heated and transformed all the presolar dust that may have collected during Earth’s formation, said lead study author Philipp Heck, the Robert A. Pritzker Associate Curator of Meteoritics and Polar Studies at the Field Museum of Natural History in Chicago.

When large, orphan space rocks form — such as the asteroid that produced Murchison — they, too, can pick up ancient, interstellar dust. But unlike dynamic planets, Murchison’s parent asteroid is “an almost-inert piece of rock that formed from the solar nebula and hasn’t changed since then,” so the presolar grains haven’t been cooked down into another type of mineral, Heck told Live Science.

Most presolar grains measure about 1 micron in length, or are even smaller. But the grains the scientists analyzed for the study were much bigger, ranging from 2 to 30 microns in length.

“We call them ‘boulders,'” Heck said. “We can see them with an optical microscope.”

For the study, Heck and his colleagues examined 40 of these so-called boulders from Murchison, grinding up bits of the meteorite and adding acid, which dissolved minerals and silicates and revealed the acid-resistant presolar grains.

“I always compare it to burning down the haystack to find the needle,” Heck said.

The researchers used a dating technique that measured the grains’ exposure to cosmic rays during their interstellar journey over billions of years. In space, high-energy particles emanate from different sources, bombarding and penetrating solid objects that pass by. Those cosmic rays react with rock to form new elements that accumulate over time. By measuring the quantity of different elements in presolar grains, scientists can estimate how long the dust has been bathing in cosmic rays.

Think of it this way: Imagine putting a bucket outside during a rainstorm. As long as the rain falls at a steady rate, you could calculate how long the bucket had been outside based on the amount of rain that it collects, Heck explained.

Most of the grains — about 60% — dated to around 4.6 billion to 4.9 billion years ago. One possible explanation for why there were so many grains of this age is that they were all the product of a “little baby boom” of star birth in our galaxy that took place around 7 billion years ago.

This discovery supports findings by other astronomers that indicate a dramatic spike in star formation around 7 billion years ago, the researchers reported.

What’s more, many of the grains weren’t traveling through space alone; they journeyed as clumps, “almost like granola clusters,” according to Heck. Though it’s uncertain what bound these grains, other studies have shown that some presolar grains are coated with a sticky film of organic matter, which could have cemented these clusters together, Heck said.

Grinding and analyzing bits of space rock also presented the researchers with an unusual by-product — a strong and very pungent smell. The paste of ground-up meteorite released a stench “like rotten peanut butter,” study co-author Jennika Greer, a graduate student at the Field Museum and the University of Chicago, said in a statement.

Another meteorite that was recently added to the Field Museum’s collection, the Aguas Zarcas from Costa Rica, or “cosmic mudball meteorite,” was said to smell like cooked Brussels sprouts. Volatile organic compounds in rocky meteorites that are abiotic — not formed by living organisms — produce these distinctive smells when they are heated or dissolved, Heck said.

And Murchison was an especially smelly meteorite, Heck said. When he visited the town of Murchison in 2019 for the 50th anniversary of the meteorite’s landing, he spoke with people who had witnessed the event or collected fragments of the space rock. Many of them had tales to tell about the meteorite’s distinctive aroma.

“They said the whole town smelled like methylated spirits, a very strong organic smell,” Heck said. “Even those who hadn’t seen the meteorite themselves — they smelled it.”