The explosion likely occurred within a dense shell of matter shed by a companion star. 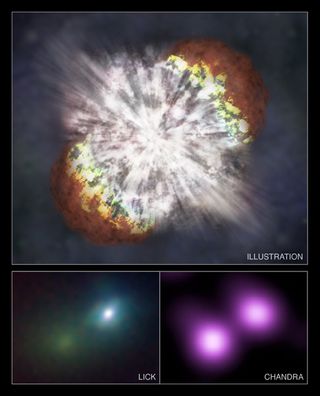 The supernova SN 2006gy was the brightest and most energetic stellar explosion ever recorded when it was discovered in 2006. At top, an artist’s illustration shows how SN 2006gy may have appeared at a close distance. The bottom left panel is an infrared image by the Lick Observatory of NGC 1260, the galaxy containing SN 2006gy. The panel to the right shows an X-ray image of the same field of view captured by NASA’s Chandra X-ray Observatory.(Image: © X-ray: NASA/CXC/UC Berkeley/N.Smith et al.; IR: Lick/UC Berkeley/J.Bloom & C.Hansen)

One of the most luminous stellar explosions ever detected may now be explained. It came from the detonation of a dead star within the dense shell of matter ejected from that sun’s companion star, a new study suggests.

Supernovas are explosions that can happen when stars die, either after the stars burn all their fuel or gain a sudden influx of new fuel. These outbursts can briefly outshine all of the other suns in these stars’ galaxies, making them visible from halfway across the universe.ADVERTISING

Recently, scientists discovered a rare class of exploding star known as superluminous supernovas. These explosions are up to 100 times brighter than regular supernovas but account for less than 0.1% of all supernovas.

Much remains unknown about what powers superluminous supernovas; they release far more energy than any standard mechanism for powering supernovas can explain. To learn more about what drives these extraordinary explosions, scientists focused on SN 2006gy, one of the first known superluminous supernovas. SN 2006gy occurred in a galaxy 240 million light-years away and was the brightest and most energetic supernova ever recorded when it was discovered, in 2006.

A little more than a year after SN 2006gy was spotted, researchers detected an unusual spectrum of light from the supernova. Now, scientists have deduced that this light came from an envelope of iron around the supernova, revealing clues as to what might have caused the explosion.

The researchers developed computer models of what kind of light would be generated by envelopes of iron with various masses, temperatures, clumping patterns and other properties. They found that the wavelengths and energies of light seen from SN 2006gy likely came from a huge amount of iron — “over a third of the sun’s mass” — expanding at about 3,355 mph (5,400 km/h), study lead author Anders Jerkstrand, an astrophysicist at the Max Planck Institute for Astrophysics in Garching, Germany, told Space.com.

Initial analysis of SN 2006gy suggested that the supernova happened after a giant star ran out of fuel, with the star’s core then collapsing under its own weight into an extraordinarily dense nugget in a fraction of a second and rebounding with a giant blast outward. However, such a “core-collapse” supernova likely would not have generated an iron envelope with the kind of mass and expansion rate that the new study calculated.

Instead, a scenario consistent with the new findings suggests that SN 2006gy was a so-called Type Ia supernova, which occurs when one star pours enough fuel onto a dead star known as a white dwarf to trigger an extraordinary nuclear explosion. (White dwarfs are the superdense, Earth-size cores of stars that exhausted all their fuel and shed their outer layers without catastrophic explosions.)

Specifically, the scenario called for a white dwarf in a close binary orbit with a hydrogen-rich companion star. “Such systems are in fact well known and common — the so-called cataclysmic variables, of which we know of several hundred,” Jerkstrand said.Click here for more Space.com videos…‘We Don’t Planet’ Episode 12: Type-1a SupernovaeVolume 0% PLAY SOUND

When such a companion star gets old, it swells, trapping the white dwarf in its expanding shell. The resulting friction “causes the white dwarf to spiral towards the center, and at the same time, the envelope material is ejected,” Jerkstrand said.

Normally in such binary systems, the white dwarf may spend millions or billions of years spiraling toward the center of its companion before exploding as a Type Ia supernova, Jerkstrand said. However, with SN 2006gy, the researchers suspected that the white dwarf may have exploded “within only about a century since the initiation of the inspiral phase,” he said.

This supernova then slammed into the dense shell of material ejected from the white dwarf’s companion star, which was still relatively nearby. Striking this envelope would have been “like hitting a brick wall, and most of the motion energy of the supernova was transformed into light in this collision,” explaining why SN 2006gy was so bright, Jerkstrand said.

A few other superluminous supernovas share similar properties with SN 2006gy. That similarity suggests that these supernovas also share the same underlying mechanics, the researchers said.

Future research can investigate how binary systems that might give rise to such superluminous supernovas may form. Researchers could also look into what exactly might trigger a Type Ia supernova from white dwarfs in such systems only a century or so after they spiral toward the centers of their companions.

at the center of the companion, or did it accrete matter until it became too massive and exploded?” Jerkstrand said.

The scientists detailed their findings in the Jan. 24 issue of the journal Science.