Remember those viral UFO videos you saw last year? The government would like you to forget them, please. 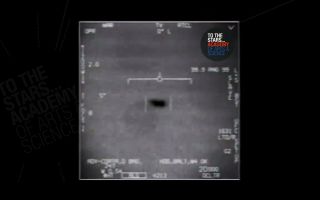 A still from one of the notorious Navy UFO sighting videos.(Image: © To The Stars Academy of Arts and Science)

In December 2017 and March 2018, The New York Times released three allegedly declassified videos showing U.S. Navy pilots trailing some unidentified flying objects. The mystery crafts moved at hypersonic speeds, flying tens of thousands of feet above the Earth with no distinct wings, engines or visible signs of propulsion whatsoever. Were they flying saucers? Incredibly high-tech drones? The pilots had no idea — and, according to a recent statement from Navy intelligence officials, neither does the U.S. government.

In a statement delivered to the intelligence news website The Black Vault, Joseph Gradisher, a spokesperson for the Deputy Chief of Naval Operations for Information Warfare, announced that the Navy officially considers the craft in these three videos “unidentified aerial phenomena.” That means that the eerie videos are authentic — and that the objects, which were detected in restricted military training airspaces in 2004 and 2015, were not supposed to be there. The objects still have not been successfully identified as any known type of aircraft.

The UFO footage was also never cleared for public release, Gradisher told The Black Vault — meaning these are three unidentified phenomena you were never supposed to know about.

According to The Black Vault, the videos may have been improperly released by a former Pentagon employee who had applied for permission to share them across several government agencies as part of a database on unmanned aerial vehicles (UAV) he was allegedly compiling. The man received permission to share the videos for “[US Government] Use Only,” paperwork obtained by The Black Vault shows. However, Navy officials never declassified the footage for public release, Gradisher said.

What was the Navy trying to withhold, specifically? Only some very bizarre aerial acrobatics. In one incident filmed in 2004, for example, the unidentified objects “appeared suddenly at 80,000 feet, and then hurtled toward the sea, eventually stopping at 20,000 feet and hovering,” The New York Times wrote. “Then they either dropped out of radar range or shot straight back up.”

To be clear, nobody is saying that these mystery aircraft have anything to do with alien visitors; they simply can’t be identified or explained by current aeronautical knowledge. Comforted? Good — because this sort of thing probably happens way more often than we know.