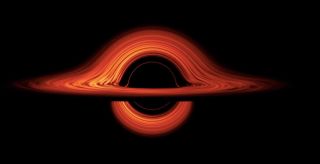 We’re used to thinking of possible homes for life on watery worlds orbiting stars like the sun, but a new research paper has found a new potential habitat: a rocky planet orbiting just past the event horizon of a rapidly spinning supermassive black hole.

The exotic forces around that black hole are able to warm up the planet just right, but the scenario comes with a catch: the planet must orbit at nearly the speed of light.

We don’t know all the possible places that life could arise in our universe, because so far we only have one example: us. And while scientists (and sci-fi authors) enjoy thinking about all sorts of exotic arrangements and possibilities for lifeforms, for serious searches of extraterrestrial intelligence, our best bet is to use our own circumstances as a template, hunting for life that isn’t too dissimilar to what we find on Earth.

From that, we can draw two extremely broad requirements. One, life like our own requires liquid water. Water is the most common molecule in the universe, composed of hydrogen (element No. 1 when it comes to abundance in the cosmos) and oxygen (the byproduct of fusion reactions inside stars like our sun, making it also very common). But that water is usually either vaporized into a plasma (and hence very bad for life) or locked down in its solid, frozen state as ice (also not very good for life).

The liquid stuff is harder to come by, and requires a source of heat that isn’t so hot that water just evaporates. We’ve found this perfect balance in only two kinds of locations: the so-called “habitable zone” of stars, a band of orbits where the light output it just right; and buried underneath the icy crusts of certain moons of the outer planets in our solar system, where tidal heating generates the necessary energy.

But just raw heat isn’t enough. Life is a complex process that uses energy to do interesting things (like move around, eat and reproduce). All those processes are not perfectly efficient, so they generate waste heat. This waste heat must be dumped safely away from the environment; otherwise, you end up with nightmare greenhouse scenarios, with temperatures escalating to uncontrolled levels and killing off any life that got started.

On the Earth, we dump our waste heat into the vacuum of space itself in the form of infrared radiation. This contrast, between a source of energy and a place to put all the waste, enables life to flourish on our home planet, and presumably any other planet with a similar setup.

At first glance, black holes appear to be the least inviting homes for any potential lifeforms. After all, they are objects made of pure gravity, pulling in anything that gets too close beneath their event horizons, shutting them off from further contact with the rest of the universe forever. Nothing, not even light, can escape their gravitational maw.

Black holes don’t give off light themselves — they’re black, after all — but that inescapable gravity can provide a surprise, unique to them throughout the cosmos.

Permeating the universe is something called the cosmic microwave background (CMB). The CMB is the leftover radiation from when the universe was just a baby, only 380,000 years old. It is, by far, the greatest source of radiation in the entire cosmos, easily swamping all the stars and galaxies by many orders of magnitude. The reason you don’t see it is that it’s primarily in the microwave region of the electromagnetic spectrum (hence the name).

In other words, the CMB is cold, with a temperature just about 3 degrees above absolute zero.

But as that CMB light falls into a black hole, it becomes blueshifted, bumped to higher and higher energies from the extreme gravity. Just before it hits the event horizon, CMB light can gain so much energy that it shifts into infrared, visible and even ultraviolet portions of the spectrum.

In other words, near a black hole, the CMB stops being cold, and gets very, very hot.

What’s more, if the black hole is spinning, it’s able to focus the light into a narrow beam, making the CMB appear as a single spot on the sky. Kind of like a sun.Click here for more Space.com videos…Search for Alien Life – Decades of Earth Observations a KeyVolume 0% PLAY SOUND

So if you’re able to get close enough to a black hole, you’ll find yourself surprisingly warm, and if you’re a planet, you might just find your water ice converted into liquid water oceans — a potential home for life.

But for life to thrive, it also needs a heat sink, which can handily be provided by the black hole itself. Close to the black hole, gravitational distortions enlarge the appearance of the event horizon, swelling it far larger than you might naively think.

Close enough to the black hole (say, at a radius less than 1% above the event horizon), the hot CMB shrinks to fill only a small disk, while the event horizon swells to cover 40% of the sky. If your planet is rotating, you then have a “sun” and a “night” — and life has everything it needs to do its business.

But orbits at this radius are usually extremely unstable, prone to just falling all the way into the terrible blackness itself. Recently, a team of researchers published an analysis in The Astrophysical Journal, exploring this scenario to see if there was any way to stabilize the situation.

And they found a way to make it work. If the black hole is big, at least 1.6×108 times the mass of the sun, and rapidly spinning, then it hosts a “habitable zone” just barely above the event horizon, where the CMB light peaks in the UV part of the spectrum — hot, but not terrible. Any closer and the planet would be destroyed by extreme gravitational forces, and any farther and the CMB would be too cold. But in that narrow band? Just right.

Though this scenario is possible, it wouldn’t be very pretty. The planet would have to orbit at nearly the speed of light, experiencing a time dilation factor of thousands — meaning that for every second that goes by on that world, hours would slide by for us. And who knows if a planet could even find its way that close to a black hole while still surviving.

Still, the work shows that we have to keep our minds open when it comes to potential homes for life, up to and including some of the most terrible environments in the universe.