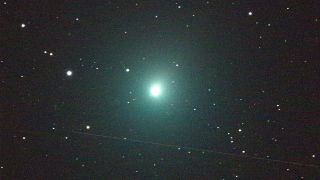 For years, amateur astronomers have been waiting for a bright, naked-eye comet to pass by Earth — and finally, such an object may have arrived.

The possible celestial showpiece is known as Comet ATLAS, or C/2019 Y4. When it was discovered on Dec. 28, 2019, it was quite faint, but since then, it has been brightening so rapidly that astronomers have high hopes for the spectacle it could put on. But given the tricky nature of comets, skywatchers are also being cautious not to get their hopes up, knowing that the comet may fizzle out.ADVERTISING

It’s been awhile since a comet gave skywatchers a good show, particularly in the Northern Hemisphere. In March 2013, Comet PanSTARRS was visible right after sunset, albeit low in the western sky. But although it briefly attained first magnitude with a short, bright tail, its low altitude and a bright, twilight sky detracted from what otherwise would have been a much more prominent object. Comet Lovejoy in 2011 and Comet McNaught in 2007 both evolved into stunning objects, but unfortunately, when at their best, were visible only from the Southern Hemisphere.

It has now been nearly a quarter of a century since we have been treated to a spectacularly bright comet: Comet Hale-Bopp passed by during the spring of 1997 and Comet Hyakutake did so exactly one year earlier. Both were truly “great” comets, very bright and fantastically structured; in very dark conditions, Hyakutake’s tail appeared to stretch more than halfway across the sky.

So now, after a “comet drought,” Comet ATLAS may finally enliven the evening skies of early spring. Or then again, maybe not.

The comet’s moniker is an acronym for Asteroid Terrestrial-impact Last Alert System (ATLAS), a robotic astronomical survey system based in Hawaii and optimized for detecting smaller near-Earth objects a few weeks to a few days before their closest approach. But on occasion, the survey will also find a comet.

When astronomers first spotted Comet ATLAS in December, it was in Ursa Major and was an exceedingly faint object, close to 20th magnitude. That’s about 398,000 times dimmer than stars that are on the threshold of naked-eye visibility. At the time, it was 273 million miles (439 million kilometers) from the sun.

But comets typically brighten as they approach the sun, and at its closest, on May 31, Comet ATLAS will be just 23.5 million miles (37.8 million km) from the sun. Such a prodigious change in solar distance would typically cause a comet to increase in luminosity by almost 11 magnitudes, enough to make ATLAS easily visible in a small telescope or a pair of good binoculars, although quite frankly nothing really to write home about.

Except, since its discovery, the comet has been brightening at an almost unprecedented speed. As of March 17, ATLAS was already magnitude +8.5, over 600 times brighter than forecast. As a result, great expectations are buzzing for this icy lump of cosmic detritus, with hopes it could become a stupendously bright object by the end of May.

Another factor buoying hopes for ATLAS as a potential dazzler is that its orbit is nearly identical to that of the so-called Great Comet of 1844.

Like the 1844 comet, ATLAS follows a trajectory that would require 6,000 years per orbit and take it to beyond the outer reaches of the solar system, roughly 57 billion miles (92 billion km) from the sun. Probably in the far-distant past, a much larger comet occupied this same orbit, but fragmented into several pieces — including the 1844 comet and ATLAS — upon rounding the sun.

But any comparison is dangerous. The 1844 comet was not discovered until shortly after perihelion, so we have no knowledge of its brightness behavior beforehand. But that information is currently all we know about ATLAS, and we won’t be able to see the object after it reaches the sun.

And let’s not forget some of the comets of the past that seemingly had “glory” written all over them, only to utterly fail to live up to expectations: Comet ISON in 2013, Comet Austin in 1990 and Comet Kohoutek in 1974.

John Bortle, who has observed hundreds of comets and is a well-known expert in the field, got his first look at Comet ATLAS through 15 x 70 binoculars on Sunday night (March 15). And he’s stumped, he wrote. “For the first time in many years I am left at a bit of a loss as to what honestly worthy advice I can offer would-be observers. I really don’t know quite what to make of this object.”

The head (or coma) of Comet ATLAS is big, albeit “very faint and ghostly,” Bortle said, which doesn’t make sense. “If it’s a truly significant visitor, it should be considerably sharper in appearance. Instead we see, at best, a quite modestly condensed object with only a pinpoint stellar feature near its heart.”

The unpredictability of comets is an old story. Astronomers use special formulas to try to anticipate how bright a comet will get. Unfortunately, comets’ individual behavior and characteristics can be as varied as people: No two are alike.

Now, here is the conundrum regarding Comet ATLAS: Until a couple of weeks ago, it was brightening at an astounding rate. That brightening has slowed somewhat, but it is still an impossible rate of brightening to maintain. Were ATLAS to continue to brighten at this rate all the way to its closest approach to the sun at the end of May, it would end up rivaling the planet Venus in brightness!

“We should expect the rate of increase to slow again,” Carl Hergenrother, an assiduous comet observer based in Arizona, said. “This is where it gets tricky for predicting just how bright it will get.” Right now, no one can predict how long it will continue to quickly brighten and how dramatically that brightening will slow.

Where to look and what to expect

The only thing left to do is to track Comet ATLAS in the days and weeks ahead. Fortunately, its path in March and April will be very favorable for Northern Hemisphere observers, as it will be circumpolar and always remain above the horizon. As darkness falls, it will be positioned more than halfway up in the north-northwest sky. Right now, the comet is in western Ursa Major, and it will shift into the boundaries of Camelopardalis the Giraffe — a rather dim, shapeless star pattern — by March 29. There it will stay, right on through the month of April.Advertisement

As to how bright Comet ATLAS will get, that’s anybody’s guess. It might become faintly visible to the naked eye under dark sky conditions by mid- or late April. By mid-May, when it disappears into the bright evening twilight, perhaps it will have brightened to second magnitude — about as bright as Polaris, the North Star.

Whether ATLAS continues to overperform and shines even brighter, develops a significant tail or suddenly stops brightening altogether and remains very faint and ghostly are all unknown right now. We’ll just have to wait and see.

“It’s going to be fun the next few weeks watching Comet ATLAS develop (and provide a nice distraction from the current state of the world), Hergenrother wrote. “Here’s to good health and clear skies!”