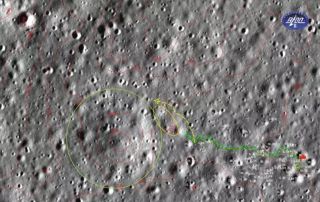 China’s Chang’e 4 mission has started its 16th lunar day of work on the far side of the moon, with the Yutu 2 rover beginning a journey in search of new areas.

Both the Chang’e 4 lander and the Yutu 2 rover and their science payloads are in good operating condition, despite the spacecraft spending over a year in the harsh conditions on the lunar surface.

Yutu 2 awoke on March 17 following sunrise over its position in Von Kármán Crater, with the lander following 16 hours later on Mar. 18, according to the China Lunar Exploration Program (CLEP).

The lander will continue its low-frequency radio astronomy observations, but a new plan has been formulated for the Yutu 2 rover, which has already provided insights into the composition of the surface and what lies below.

Yutu 2 has been driving across an area covered in ejecta from impact craters, but reaching new ground would be insightful.

“If it can enter a basalt zone, maybe we can better understand [the] distribution and structure of ejecta from meteorite impacts,” Li said. “The distance may be 1.8 kilometers [1.1 miles]. I think it may take another one year for the rover to walk out of the ejecta-covered area.”

The plan was formulated after the discovery of a previously unseen crater, forcing the team to abandon previous drive plans to head southwest.

The resilient rover, which has far exceeded its design life time of three months, or three lunar days, would need to greatly boost its average drive distances to reach the area, however.

Even if Yutu 2 does not reach this area, the rover will further contribute to our understanding of the lunar surface and subsurface with its science payloads, Ian Crawford, professor of planetary science and astrobiology at Birkbeck College, University of London, told Space.com in an email.

He adds however that the “extreme slowness of these small rovers is a strong argument for a human return to the moon.”

“The Apollo 17 astronauts traversed about 35 kilometers (22 miles) in three days, which was actually only about 22 hours of Extra Vehicular Activity time,” Crawford notes.

China is planning a lunar sample return mission, Chang’e 5, for later this year. Subsequent missions are expected to target the lunar south pole before potential crewed missions in the 2030s.

NASA meantime is developing its Artemis program to return astronauts to the moon by 2024 to 2028.