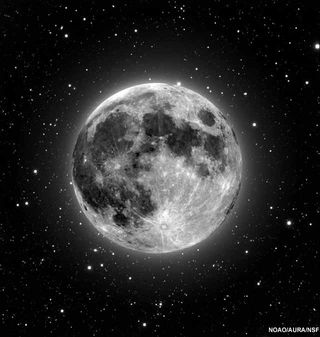 Unlike the Earth, the Moon doesn’t have enough surface activity to cover up its blemishes.(Image: © NOAO/AURA/NSF)

Recently BBC News reported that some British police departments have decided to add extra officers on nights with a full moon.

The concern isn’t over werewolves or vampires—no need to issue silver bullets or wooden stakes—but more human threats such as petty thieves and violent criminals.

For years, some who work in police and emergency services (such as doctors and nurses) have anecdotally claimed that full moon nights are busier, crazier, and more dangerous than nights when the moon is dim. This perception may be rooted more in psychology than reality.

Belief in the moon’s influence is an ancient one, and common in many cultures including our own. If police and doctors are expecting that full moon nights will be more hectic, they may interpret an ordinary night’s traumas and crises as more extreme than usual. Our expectations influence our perceptions, and we look for evidence that confirms our beliefs. (The same thing happens on “bad days” when everything seems to go wrong, but only a few key things actually do.)

Yet carefully controlled studies have not found good evidence supporting this idea.

For example, researchers Ivan Kelly, James Rotton, and Roger Culver, in their study “The Moon was Full and Nothing Happened” (published in the book “The Hundredth Monkey and Other Paradigms of the Paranormal,” 1991) examined more than 100 studies of alleged lunar effects and found no significant correlation between phases of the moon and disasters, homicide rates, etc. Furthermore, there is no known mechanism by which the moon would somehow influence a person’s mind to make him more dangerous—except of course for his own expectations.

Still, though the evidence for any direct influence of a full moon is negligible and contradictory, there is some evidence for a less direct (yet more obvious) connection.

There is a good reason why there may be more crime on the nights of a full moon; it has to do with statistics, not lunacy. People are more active during full moons than moonless nights. An especially beautiful full moon may draw families out into the night to appreciate it, and lovers to local necking spots. Muggers and other criminals who ply their trade at night also use the moon’s illumination to carry out their dirty deeds.

If there is even slightly more activity—any activity—on a full moon night, then that may translate into a slight but real increase in crime, accidents, and injuries. No werewolves needed.