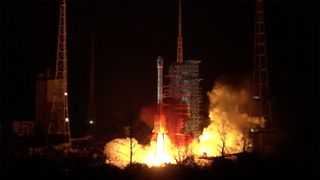 A Chinese rocket carrying a new communications satellite for Indonesia has failed to reach orbit in a launch gone awry, the second failure forChina’s space agency in less than a month, state media reported today (April 9).

The Long March 3B rocket lifted off today at 7:46 a.m. EDT (1146 GMT) from China’s Xichang Satellite Launch Center in the southwestern province of Sichuan, where the local time was 7:46 p.m. on Thursday night, according to the Xinhua News Agency. The rocket was carrying the Palapa-N1, also known as the Nusantara Dua, a next-generation satellite for broadband and broadcast communications built for the Indonesian joint venture of Indosat Ooredoo and Pasifik Satelit Nusantara.ADVERTISING

The first and second stages of the three-stage Long March 3B rocket appeared to perform well during the outset of Thursday’s launch. But something went wrong with the third stage, raining debris back to Earth and destroying the Palapa-N1 satellite, Xinhua reported.

Anyone see something falling from the sky tonight?

Officials with the Guam Homeland Defense and Civil Defense (GHS/OCD) and the Mariana Regional Fusion Center (MRFC) said the fireball was likely connected to China’s failed launch. They were monitoring all events in the region, “including widely circulated videos of a fiery object over the Marianas sky this evening,” the officials said in a statement.

“In concert with federal partners, GHS/OCD and MRFC identified that the object was likely connected to a scheduled satellite test launch from China,” they added.

The failed Long March 3B launch marks China’s second launch failure in less than a month. On March 16, a Long March 7A rocket failed to launch a classified satellite into orbit during a debut test flight from the Wenchang Satellite Launch Center on China’s southern Hainan Island.

China was not the only country launching rockets today.