Interstellar object ‘Oumuamua’s past may have been more violent than we know. New simulations reveal the peculiar chunk of space rock could have been torn apart by a star – reforming into the cigar-shape we know and love today – before being flung willy-nilly out across the galaxy.https://tpc.googlesyndication.com/safeframe/1-0-37/html/container.html

If this is indeed how ‘Oumuamua formed, the new results could answer some of our most burning questions about the more peculiar properties of this pointy space traveller.

‘Oumuamua is primarily famous for being the first rock identified as entering the Solar System from elsewhere – our first known interstellar visitor. We first became aware of it in October 2017, but it wasn’t long before its other peculiarities became apparent.

First, there’s the shape. Most asteroids and comets are sort of potato-like, but ‘Oumuamua is long and thin – its 400-metre (1,300-foot) length is around eight times its breadth. It’s also red in hue, like an asteroid baked by cosmic radiation, dry, and primarily rocky and metallic.

But it was also observed accelerating away from the Sun, faster than could be explained by a gravity assist. That behaviour is more consistent with cometary outgassing, which provides an acceleration boost as volatile ices sublimate when a comet is close to the Sun.

So, it’s still not entirely clear whether ‘Oumuamua is an asteroid or a comet.

Its properties are so unusual that some hypothesised the rock was an alien probe. (There’s absolutely no evidence for that.) Based on its showing up in our Solar System at all, there should be many more objects like ‘Oumuamua out there, in fact.

Now, researchers from the Chinese Academy of Sciences and the University of California, Santa Cruz have determined how the strange object could have formed. Not only is this process completely natural (again, no aliens here), it can explain some of ‘Oumuamua’s odder properties.

“We showed that ‘Oumuamua-like interstellar objects can be produced through extensive tidal fragmentation during close encounters of their parent bodies with their host stars, and then ejected into interstellar space,” said astronomer and astrophysicist Douglas Lin of UC Santa Cruz.

Tidal interactions are the gravitational interactions between two bodies. When a small body approaches a larger body – like a star, or a black hole, or even a large planet – the intense gravity can pull it apart in a process called tidal disruption. An apropos example would be the tidal disruption Jupiter wreaked on comet Shoemaker-Levy 9 in 1992.

Shoemaker-Levy 9 flew apart into chunks that collided with Jupiter, but the high-resolution simulations performed by Lin and his colleague Yun Zhang of the Chinese Academy of Sciences showed that, when a star is involved, a very different outcome is possible. 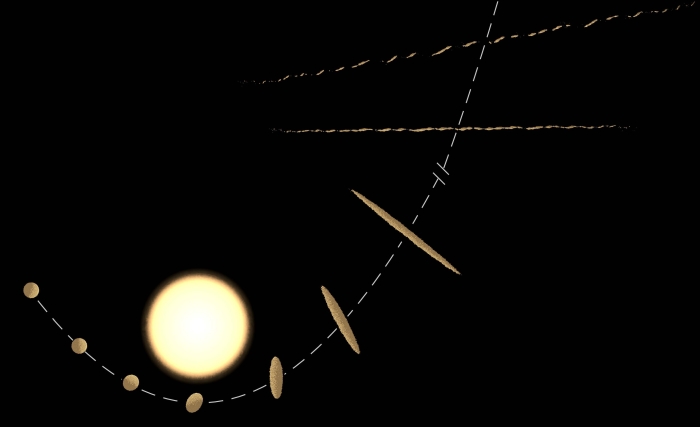 First, an object flying at just the right distance from the star – a chunk of rock, such as a planetesimal – is fragmented as the tidal stresses pull it apart. Then, as it swings around, these fragments melt and stretch into an elongated configuration. Finally, as it moves away from the star, it recombines, cools and hardens into a crust that gives the newly reformed object structural stability.

This heating and cooling could explain some of the other ‘Oumuamua’s properties, too.

“Heat diffusion during the stellar tidal disruption process also consumes large amounts of volatiles, which not only explains ‘Oumuamua’s surface colours and the absence of visible coma, but also elucidates the inferred dryness of the interstellar population,” Zhang said.

“Nevertheless, some high-sublimation-temperature volatiles buried under the surface, like water ice, can remain in a condensed form.”

As ‘Oumuamua tumbled across the cold depths of interstellar space, these volatiles would remain locked inside; but, when it neared our Sun, the heat could have induced an outgassing event to produce the observed acceleration.

The team’s scenario could also produce many more objects like ‘Oumuamua, accounting for the population of many interstellar asteroids astronomers predicted.

“On average, each planetary system should eject in total about a hundred trillion objects like ‘Oumuamua,” Zhang said. “The tidal fragmentation scenario not only provides a way to form one single ‘Oumuamua, but also accounts for the vast population of asteroid-like interstellar objects.”

At the moment, we still don’t have hard answers. We know ‘Oumuamua must have formed somehow, since it exists. This new research represents one way that could have happened, while answering some puzzles along the way. But more information is just around the corner.

Since the discovery of ‘Oumuamua, a second interstellar object – the comet 2I/Borisov – was identified last year. It’s expected that, as our technological capabilities advance, we will find many more interstellar objects visiting our Solar System.

Perhaps they will be able to reveal ‘Oumuamua’s secrets, too.

The research has been published in Nature Astronomy.