Two bright nebulas in a galaxy 163,000 light-years away are very pregnant with stars. 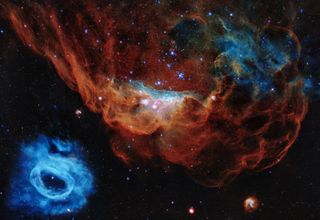 Young stars blaze to life in a nearby galaxy, repainting their cosmic neighborhood with fiery blooms of gas and radiation.

This new Hubble Space Telescope image captures just another day in the life of two young nebulas (one red, one blue) in the Large Magellanic Cloud, a satellite galaxy of the Milky Way located about 163,000 light-years away. But for scientists and space enthusiasts on Earth, the image also marks a special anniversary. Thirty years ago today (April 24), the Hubble launched from NASA’s Kennedy Space Center in Florida to begin its long mission of peering into the deepest reaches of space.ADVERTISING

While the Hubble has since homed in on galaxies from the earliest days of the universe, the telescope didn’t have to look too far to capture this stunning starscape. As a satellite of the Milky Way, the Large Magellanic Cloud (LMC) is close enough to be caught in the thrall of our galaxy’s gravity, and it inches a little bit closer to our galaxy every year. (Scientists actually think the neighboring galaxy will crash into ours in the next few billion years or so.)

With about 5% the mass of the Milky Way, the LMC contains many regions where baby stars are still actively forming. The nebulas shown in this Hubble image represent two such “stellar nurseries,” according to a statement from NASA.

These baby stars are big — at least 10 times more massive than Earth’s sun — and they’re bright. The star at the center of the blue nebula in the bottom left corner of the image is about 200,000 times brighter than our sun, Jennifer Wiseman, a senior scientist on the Hubble Project, said in a video accompanying the image.

“Powerful radiation from these stars is causing the surrounding gas to glow in stunning colors,” Wiseman said. “Those massive stars are also driving powerful winds of charged particles, which are sculpting out the bubble and ridge structures we can see across the nebula.”

NASA researchers have nicknamed this image the “Cosmic Reef” for its resemblance to a coral reef in Earth’s oceans — bursting with color and life, but hidden just beyond the reach of human sight.