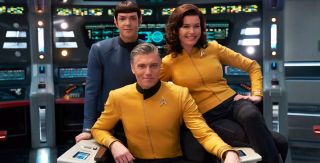 It’s official! After months of speculation — and wishful thinking —  CBS All Access has confirmed that Captain Pike is coming back, with Spock and Number One along for the ride, in the new spin-off series “Star Trek: Strange New Worlds.”

Pike (portrayed by Anson Mount), Spock (Ethan Peck) and Number One (Rebecca Romijn) most recently appeared in season two of “Star Trek: Discovery.” They will reprise those roles in “Strange New Worlds” — the first of two new, live action “Star Trek” spin-offs from CBS All Access.ADVERTISING

The Hollywood Reporter announced the news Friday (May 15), although evidence had been slowly, but steadily, accumulating that this was a very real possibility.

The new show will follow the crew of the USS Enterprise before Captain Kirk took command of the famed starship.

Related: Star Trek’s Anson Mount dishes on possible return of Capt. Pike
More: ‘Star Trek: Discovery’ Season 3: What we know and what we hope forStar Trek on CBS All Access✔@startrekcbs

In “Star Trek” lore, Pike took command of the USS Enterprise in 2250 and famed Capt. James T. Kirk replaced him 15 years later. During his tenure in Starfleet, Pike was considered to be one of the most highly decorated starship captains in Starfleet history. The events of season two  of “Discovery” take place around 2257, so we have an approximate eight-year window during which this new season could be set.

Moreover, the title of the new show suggests that this might be an episodic-based series, instead of a story arc, set during one of Pike’s five-year “tours” that many starships undertook at this point in Starfleet history, to “explore strange new worlds, to seek out new life and new civilizations, to boldly go where no one has gone before.”

The most affordable iPhone ever is now at Metro, the #1 brand in prepaid. See details.SEE MORE

Mount has even said in the past that he’d very much like to reprise the role.

“Yes, of course I’d love to continue to occupy that chair. I’m not going to grouse around and be aloof about it,” Mount told Space.com in March. “I’d love to.”

The cast took to Twitter in a message telling fans that they’d listened to the repeated requests to bring this cast back to the small screen.

Alex Kurtzman will oversee the new show, so no surprise there and Heather Kadin, Henry Alonso Myers and Akiva Goldsman will act as co-execuctive producers as well.Click here for more Space.com videos…CLOSEhttps://imasdk.googleapis.com/js/core/bridge3.386.2_en.html#goog_548614406Volume 0% PLAY SOUND

“When we said we heard the fans’ outpouring of love for Pike, Number One and Spock when they boarded ‘Star Trek: Discovery’ last season, we meant it,” Kurtzman said in a statement. “These iconic characters have a deep history in ‘Star Trek’ canon, yet so much of their stories has yet to be told. With Akiva and Henry at the helm, the Enterprise, its crew and its fans are in for an extraordinary journey to new frontiers in the Star Trek universe.”

Season three of “Discovery” will air some time later this year, while “Picard” was renewed for a second season earlier this year. A launch date for “Lower Decks” has not been announced yet.

An episode count and premiere date for “Strange New Worlds” have yet to be determined.