We’re at a really exciting time where the number of crewed vehicles going to the international space station will go from just one to three!. The Soyuz’s 8 year monopoly for getting humans to the ISS is coming to an end. So today we’re going to take a deep dive on the two new spaceships that will be responsible for taking humans to and from the International Space Station from the United States. We’ll compare the Boeing Starliner riding an Atlas V rocket to SpaceX’s Crew Dragon on their Falcon 9 Rocket. 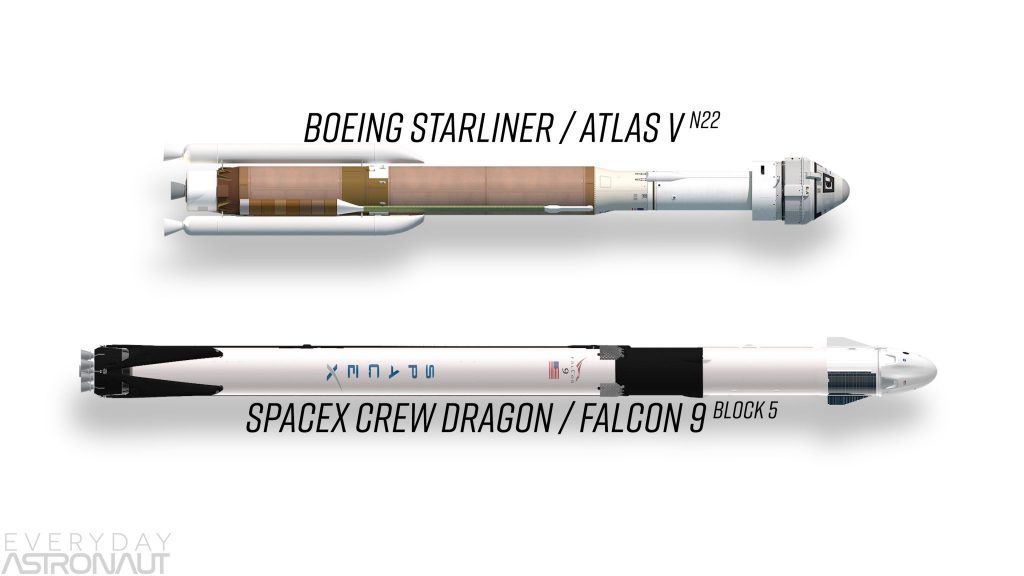 And to see how we’ve progressed in the world of human spaceflight, we’ll also compare all these systems along side Russia’s Soyuz capsule and the United State’s retired Space Shuttle in a side by side comparison. We’ll look at the designs, the rockets they’ll ride, dimensions, cost, safety considerations, and any other unique features that each vehicle offers.

Considering I’ve been up close and personal with SpaceX’s Crew Dragon Capsule, and Boeing’s Starliner, I’ve got some good insight on some of these vehicles, so let’s get started!

The International Space Station is still one the greatest feats of human engineering. After all, it’s a football field sized floating laboratory traveling 10 times faster than a bullet, circling the Earth every 90 minutes. It’s taken 33 launches to put all of its pieces into orbit and has been home to over 230 people from almost 20 countries.

The ISS typically has 6 astronauts onboard. Crews are sent in groups of 3 and usually reside at the station for 6 months. There is typically a 3 month overlap for the existing crew and the newly arriving crew. Since the Space Shuttle program ended in 2011, there’s only been a single ride to the ISS. Russia’s Soyuz vehicle.

But we’re coming up on a really exciting time as the United States prepares to send astronauts to the International Space Station from US soil on two brand new spaceships! And what’s super exciting, is NASA has hired private companies to do the development and operations in a new program called the commercial crew program.

The two companies that won contracts are SpaceX and Boeing. I’m not really going to get into how the commercial crew program got started or has progressed in today’s video, I mostly want to talk about the hardware. Each company has a unique approach to how they’ll get crew to the station, so let’s dive into each one and then we’ll compare them to the Soyuz capsule as well as the Space Shuttle to see how much has changed since the ISS was born.

Starting off with Boeing and their Starliner. Boeing started designing the Starliner, originally known as the CST-100, in 2010 after winning a contract from NASA for the CCDev program. The starliner is a traditional truncated cone capsule design, much like previous spacecraft from the United States. It can carry up to 7 astronauts at a time, although NASA won’t use more than 4 seats at a time.