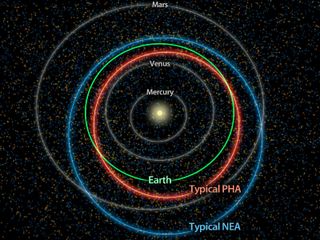 This diagram illustrates the differences between orbits of a typical near-Earth asteroid (blue) and a potentially hazardous asteroid, or PHA (orange). PHAs have the closest orbits to Earth’s orbit, coming within 5 million miles (about 8 million kilometers), and they are large enough to survive passage through Earth’s atmosphere and cause significant damage.(Image: © NASA/JPL-Caltech)

A new NASA survey has pinned down the number of asteroids that could pose a collision threat to Earth in what scientists say is the best estimate yet of the potentially dangerous space rocks.

The survey found there are likely 4,700 potentially hazardous asteroids, plus or minus 1,500 space rocks, that are larger than 330 feet (100 meters) wide and in orbits that occasionally bring them close enough to Earth to pose a concern, researchers said. To date, only about 30 percent of those objects have actually been found, they added.

Potentially hazardous asteroids, or PHAs in NASA-speak, are space rocks in orbits that come within 5 million miles (8 million kilometers) of Earth and are large enough to cause damage on regional or global scale if they were ever to hit our planet.

The new study was based on observations from NASA’s Wide-field Infrared Survey Explorer (WISE), an infrared space telescope. While the telescope data returned an estimate of the potentially dangerous near-Earth asteroid population that is similar to previous projections, it also revealed some surprising new results.RECOMMENDED VIDEOS FOR YOU…Click here for more Space.com videos…Saharan dust cloud fertilizes soil in the AmazonVolume 0% PLAY SOUND

According to the survey, about twice as many asteroids are in so-called “lower-inclination orbits” — which are more closely aligned with Earth’s path around the sun than other objects — than previously thought researchers said. [Video: WISE Telescope’s Asteroid Census]

“A possible explanation is that many of the PHAs may have originated from a collision between two asteroids in the main belt lying between Mars and Jupiter,” NASA officials explained in a statement. “A larger body with a low-inclination orbit may have broken up in the main belt, causing some of the fragments to drift into orbits closer to Earth and eventually become PHAs.”

Those low-inclination space rocks also appear to be smaller and brighter than other near-Earth asteroids and are more likely to encounter Earth, researchers said.

“Our team was surprised to find the overabundance of low-inclination PHAs,” Amy Mainzer, of NASA’s Jet Propulsion Laboratory in Pasadena, Calif., said in a statement. Mainzer is principal investigator of WISE’s asteroid-hunting mission, which is called NEOWISE.

“Because they will tend to make more close approaches to Earth, these targets can provide the best opportunities for the next generation of human and robotic exploration.”

Scientists made the new near-Earth asteroid estimate based on observations of 107 asteroids by WISE, which launched in 2009 and mapped the entire sky twice before ending its primary mission in 2011. Before shutting down, the observatory made a concerted search for near-Earth asteroids as part of an extended mission dubbed NEOWISE.

The $320 million WISE telescope snapped images of about 600 near-Earth asteroids, with about 135 of them being completely new discoveries. The telescope also observed millions of other objects, including distant galaxies and star nurseries.

“NASA’s NEOWISE project, which wasn’t originally planned as part of WISE, has turned out to be a huge bonus,” Mainzer said. “Everything we can learn about these objects helps us understand their origins and fate.”

The data from NEOWISE, when combined with other asteroid data observations, helped NASA announce in 2010 that about 90 percent of the largest near-Earth asteroids that come close to our planet had been identified.

The new survey’s results will be detailed in an upcoming edition of the Astrophysical Journal.