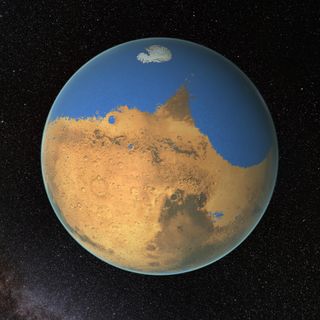 An artist’s depiction of Mars covered in water, as it may have been about 4 billion years ago.(Image: © NASA/GSFC)

Remnants of water once found on the surface of Mars may be hidden in a handful of small lakes below the Red Planet’s south pole, and more could exist, according to new research.

For decades, researchers have suspected that water lurks below the polar icecaps of Mars, just as it does here on Earth. In 2018, scientists detected evidence for such a reservoir on the Red Planet — signs of a lake about 12 miles (19 kilometers) across and hidden below about a mile (1.5 km) of ice at the south pole of Mars.

At the time, the researchers said that studying this underground pool of water could yield insights on the past and present chances for life on Mars. However, scientists had many more questions than answers about the origin, composition and longevity of this lake and its water.

In the new study, to learn more about this hidden water, researchers used the MARSIS radar sounder instrument on board the European Space Agency’s Mars Express spacecraft to scan a 155-by-185 mile (250-by-300 km) area surrounding the suspected underground lake. The scientists analyzed this radar data with techniques previously used to detect lakes under glaciers in Antarctica.

The scientists confirmed the liquid nature of the previously observed lake, narrowing down its dimensions to about 12 by 18 miles (20 by 30 km) in size. They cannot say how deep this lake extends, as the radio waves from MARSIS cannot penetrate salty water, study co-author Elena Pettinelli, a geophysicist at Roma Tre University in Rome, told Space.com.

Moreover, Pettinelli and her colleagues identified three other lakes on the order of 6 by 6 miles (10 by 10 km) in size. Strips of dry rock separate these smaller patches of water from the main lake, the scientists said.

The researchers suggested these lakes are extraordinarily salty. High brine content would keep their water liquid despite the extremely cold conditions at the base of the glaciers at Mars’ south pole, the scientists noted.

Although Martian polar ice may be melting a little due to warm noontime temperatures, the scientists do not think it likely that such ongoing processes formed these lakes. Instead, the scientists think this saltwater may be the remnants of a larger body of water now lost from the surface, and may be millions or even billions of years old, Pettinelli said.

Scientists have considered the possibility that geothermal activity might have melted polar ice to form the underground lakes, but that explanation was plausible when there was only one such body of water. Forming several lakes this way might require a huge geothermal anomaly. “I don’t think it is physically possible, given what we know,” Pettinelli said.

Instead, these lakes may have formed due to a warmer global climate in the Martian past, Pettinelli said. “This is a complex system of water, not just a single pond,” she said. “It suggests that the conditions that created these lakes might have been more spread across the region, that there might be other systems like this around.”

All in all, if these lakes “are remnants of water that was once on the surface, it certainly may have been a good habitat to harbor life, extinct or living,” Pettinelli said. But the ideal mission to study such potential life would need to drill 0.9 miles (1.5 km) into the ice, which isn’t possible with available technology, she said. “Still, maybe one day a mission to the Martian poles may sample the surface there to see if we can find interesting information,” Pettinelli said.

In the future, the scientists would like to look for similar networks of lakes elsewhere at the south pole, and maybe at the north pole as well, Pettinelli said.

The scientists detailed their findings online today (Sept. 28) in the journal Nature Astronomy.