Finding Planet Nine may require looking at telescope images in a different light. 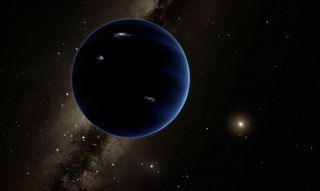 Artist’s illustration of Planet Nine, a world about 10 times more massive than Earth that may lie undiscovered in the far outer solar system.(Image: © Caltech/R. Hurt (IPAC))

Astronomers are vetting a “shifting and stacking” technique that could aid the hunt for the putative world, which some researchers think lurks undiscovered in the far outer system, way beyond Pluto’s orbit.

The strategy involves shifting space-telescope images along sets of possible orbital paths, then stacking the photos together to combine their light. The technique has already been used to discover some moons in our solar system, and it could potentially spot Planet Nine — also known as Planet X, Giant Planet Five or Planet Next — and other extremely farflung objects, researchers said.

“You really can’t see them without using this kind of method,” Malena Rice, an astronomy Ph.D. student at Yale University in Connecticut, said in a statement. “If Planet Nine is out there, it’s going to be incredibly dim.”

Rice is lead author of a new study that put the method into action. She and co-author Greg Laughlin, an astronomy professor at Yale, shifted and stacked images captured by NASA’s Transiting Exoplanet Survey Satellite (TESS), which hunts for alien worlds from Earth orbit.

In a test, the researchers found the faint signals of three known trans-Neptunian objects (TNOs) — small bodies that circle the sun beyond Neptune’s orbit — in shifted and stacked TESS images. The scientists then conducted a blind search of two distant patches of sky, turning up 17 new TNO candidates.

“If even one of these candidate objects is real, it would help us to understand the dynamics of the outer solar system and the likely properties of Planet Nine,” Rice said. “It’s compelling new information.”

The researchers are currently working to confirm the 17 candidate TNOs, using imagery captured by ground-based telescopes.

TNOs are bread crumbs that could lead to the way to Planet Nine. Researchers have inferred the hypothetical world’s existence from the odd orbits of some TNOs, which they say are clustered in a way that strongly suggests sculpting by a big, farflung “perturber.” The data indicate a planet five to 10 times more massive than Earth, orbiting the sun hundreds of times farther away than our world does.

Not everyone is on board with this interpretation, however. Some scientists think the TNOs’ odd clustering arises from the combined gravitational influence of their many minuscule neighbors, not a single big object.

The new study has been accepted by The Planetary Science Journal. Rice presented the results today (Oct. 27) at the annual meeting of the American Astronomical Society’s Division for Planetary Sciences, which is being held virtually this year.

Editor’s note: This story was updated at 4:20 p.m. EDT to clarify that Rice, not Laughlin, is lead author of the new study.