The second smallest and innermost of the four Galilean moons, Io, was first documented by Galileo Galilei in January 1610. Io proved to earthlings, along with the moons Ganymede, Europa and Callisto, that our pale blue point is not the center of the universe, the galaxy or even the solar system, since these four satellites were apparently orbiting Jupiter, unlike us. While Galileo kept his observations secret for years because of the then Catholic Church, his documentation of Io paved the way for some very strange findings about this moon in the following centuries.

Hot, active volcanoes produce almost half of Jupiter’s moon Io’s sulfur atmosphere, according to new observations using the ALMA telescope. The rest comes from cold sulfur deposits that freeze on the surface, then sublimate in sunlight. Sharing is caring! 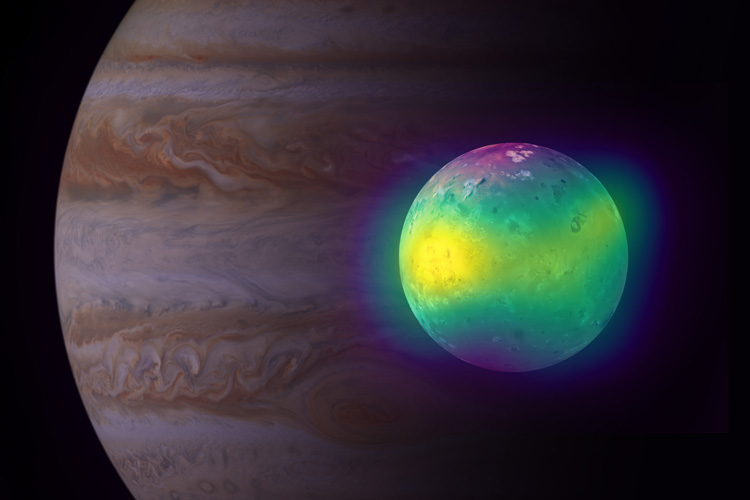 Io, one of the four large Galilean moons of Jupiter, is the most volcanically active body in our solar system, even more so than Earth. It has over 400 active volcanoes and is often described as hellish. Io also has an extremely thin atmosphere, composed mostly of sulfur dioxide (SO2). This little world’s volcanoes regularly spew sulfur dioxide into its atmosphere. Still, scientists weren’t sure whether the atmosphere stems from hot sulfur dioxide coming directly from the volcanoes, or cold sulfur dioxide which accumulates on Io’s surface and freezes before sublimating into the atmosphere. Now they’ve determined it’s both.

Using the ALMA telescope in Chile, researchers at the University of California, Berkeley have announced that up to half of the sulfur dioxide in Io’s atmosphere comes directly from its volcanoes. The results have been published in two new peer-reviewed papers accepted for publication in The Planetary Science Journal, which you can read here and here.

Astronomer Imke de Pater, who led the study, said in a statement:

It was not known which process drives the dynamics in Io’s atmosphere. Is it volcanic activity, or gas that sublimates from the icy surface when Io is in sunlight? What we show is that, actually, volcanoes do have a large impact on the atmosphere.

The answer, it turns out, is both.

Some of the sulfur dioxide does indeed freeze out onto the surface, the researchers found. This happens when Io passes through Jupiter’s shadow every 42 hours. When Io was being observed by the researchers on March 20, 2018, they noticed that radio emissions from the sulfur dioxide dropped exponentially. This meant that Io’s lower atmosphere, 6-12 miles (10-20 km) in altitude, collapsed and froze onto the surface.

On September 2 and 11, 2018, the sulfur dioxide emissions rose again within 10 minutes after Io emerged from Jupiter’s shadow back into sunlight. De Pater said:

As soon as Io gets into sunlight, the temperature increases, and you get all this SO2 ice subliming into gas, and you reform the atmosphere in about 10 minutes’ time, faster than what models had predicted.

That explains where some of the frozen sulfur dioxide comes from. But the researchers noticed something else as well. ALMA detected abundant sulfur dioxide over the volcanoes, as well as low levels of the gas globally in Io’s atmosphere. This suggested that the more widespread gas was originating from unseen or “stealth” volcanoes. They emit sulfur dioxide, but not other smoke or particles that can be easily seen.

Right now, the researchers think that extra gas is coming from such stealth volcanoes, although they couldn’t completely rule out the possibility that it could be sulfur dioxide that isn’t completely condensing out onto the surface. As de Pater noted:

The SO2 that we see with ALMA when Io is in eclipse is at a very low level, and we can’t say if that is stealth volcanism or caused by SO2 not completely condensing out. 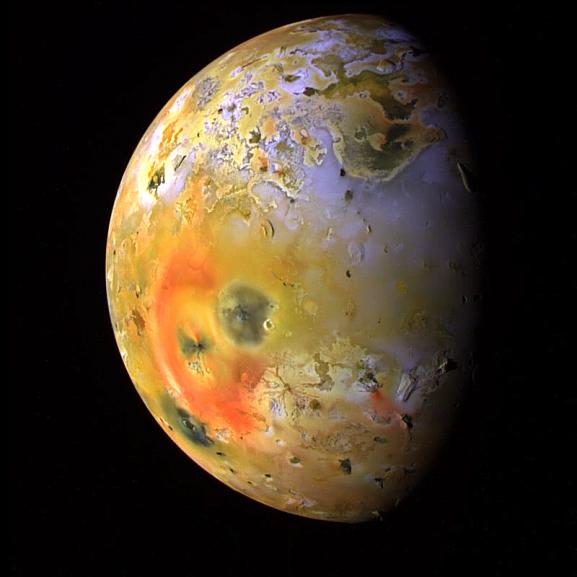 Io, as seen by the Galileo spacecraft on September 19, 1997. Image via NASA/ JPL/ University of Arizona/ NASA Photojournal.

Earlier observations from the Keck Observatory from last July, however, supported the stealth volcanism scenario. Keck detected abundant sulfur monoxide (SO) over the volcanoes, as well as widespread in the atmosphere. The researchers say that sunlight breaks the sulfur-oxygen bond in the sulfur dioxide that has been ejected hundreds of kilometers above the surface, creating the sulfur monoxide. De Pater said:

But then, when we looked at the SO with Keck, we can only explain the SO emissions, which are widespread on the surface, through this stealth volcanism, because excitation of the SO requires a very high temperature.

By observing Io in its orbit around Jupiter as it moved into and then out of Jupiter’s shadow, the researchers were able to figure out how much of the moon’s sulfur dioxide deposits came from freezing out on the surface and how much came from stealth or other volcanoes. Statia Luszcz-Cook from Columbia University in New York said:

When Io passes into Jupiter’s shadow, and is out of direct sunlight, it is too cold for sulfur dioxide gas, and it condenses onto Io’s surface. During that time, we can only see volcanically-sourced sulfur dioxide. We can, therefore, see exactly how much of the atmosphere is impacted by volcanic activity. 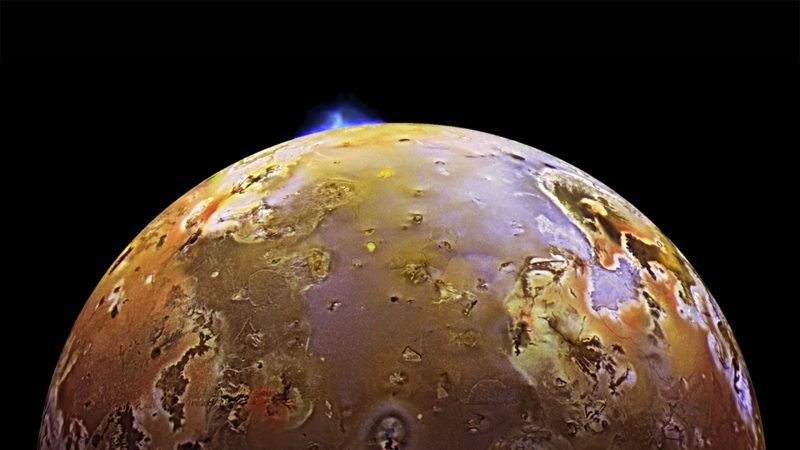 A volcanic eruption on Io, caught by Galileo’s cameras on June 28, 1997. Image via NASA. 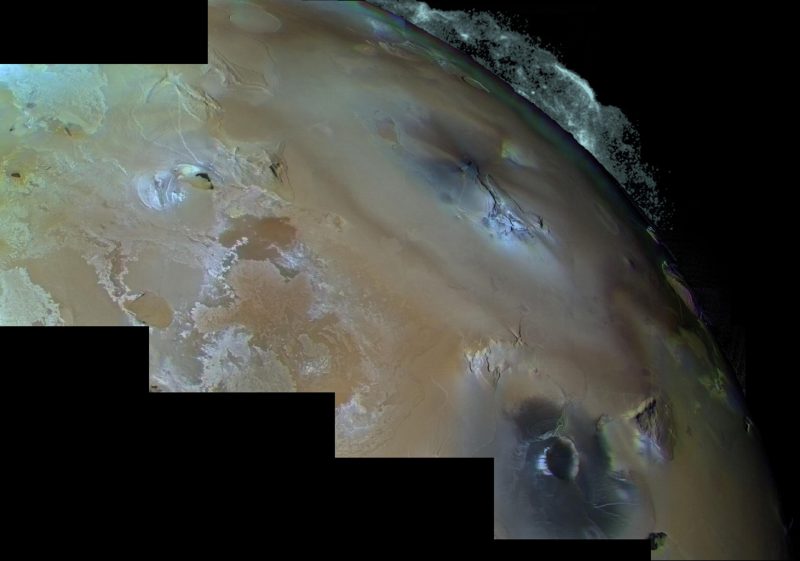 A closer look from Galileo at one of Io’s volcanoes, called Pele, as it was erupting. Image via NASA/ JPL/ USGS.

By using ALMA, scientists were able to “see,” for the first time, plumes of both sulfur dioxide and sulfur monoxide coming up from Io’s volcanoes. Two of those volcanoes, Karei Patera and Daedalus Patera, were erupting in March, and a third volcano was active in September.

The researchers now calculate that 30% to 50% of Io’s atmosphere is produced directly by active volcanoes.

A third gas, potassium chloride (KCI), was also detected by ALMA, and is a common component of lava. According to Luszcz-Cook:

We see KCI in volcanic regions where we do not see SO2 or SO. This is strong evidence that the magma reservoirs are different under different volcanoes.

Katherine de Kleer at the California Institute of Technology added:

By studying Io’s atmosphere and volcanic activity, we can understand more about the volcanoes, the tidal heating process and Io’s interior. 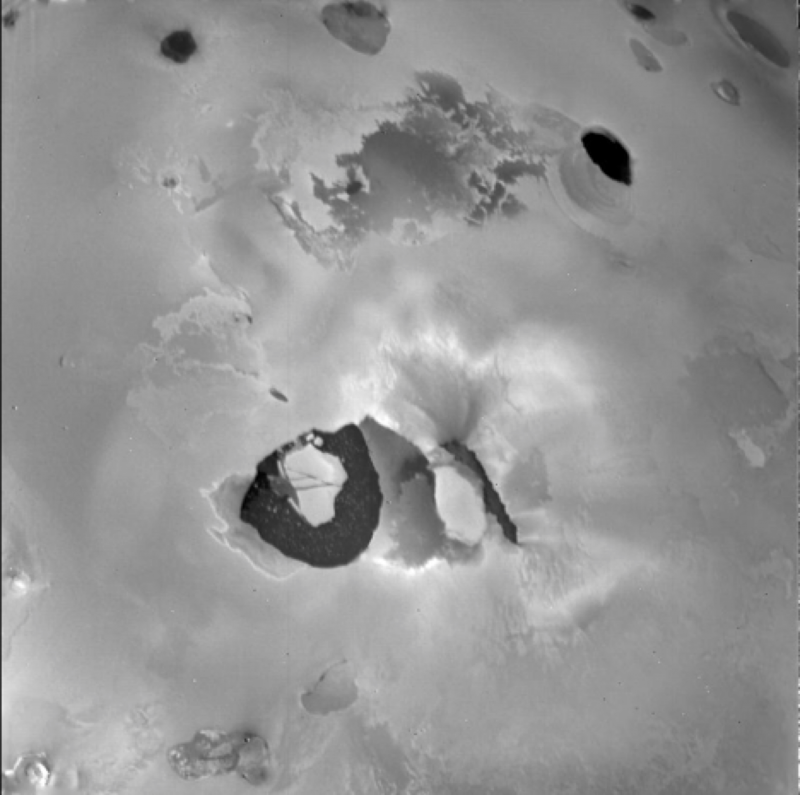 The volcano Loki Patera, as seen by Voyager 1 in 1979. The dark U-shaped feature is a lava lake about 124 miles (200 km) across. Image via NASA/ JPL/ USGS/ Planetary Science Institute. 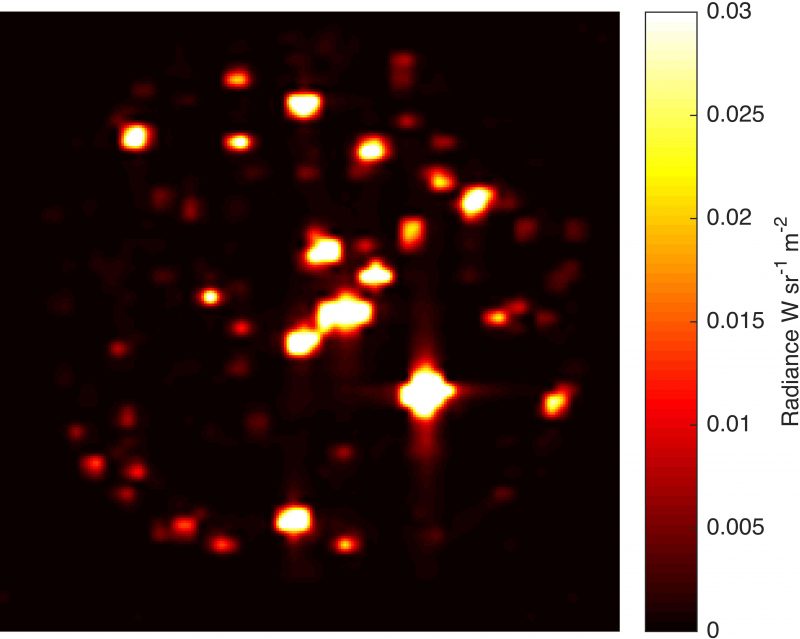 The scientists are eager to learn more about Io’s magma as well, and are planning to observe the moon at additional radio wavelengths. These can probe several inches beneath the surface and provide clues about what Io’s magma is composed of and its temperature. They also want to know more about the temperature of Io’s lower atmosphere. De Pater said:

To measure the temperature of Io’s atmosphere, we need to obtain a higher resolution in our observations, which requires that we observe the moon for a longer period of time. We can only do this when Io is in sunlight, since it does not spend much time in eclipse. During such an observation, Io will rotate by tens of degrees. We will need to apply software that helps us make unsmeared images. We have done this previously with radio images of Jupiter made with ALMA and the Very Large Array.

How can a small moon like Io, way out in the outer solar system, have active volcanoes? Io is volcanically active due to tidal heating. The same side of Io faces Jupiter, just like the same side of the moon always faces Earth. The gravitational pull of Jupiter, as well as the moons Europa and Ganymede, creates tremendous friction and heating inside Io.

The new results help to solve the mystery of how Io’s atmosphere forms and how its volcanoes play a major part in that. But there are still many more questions to be answered – and new ones to be asked – about the solar system’s most active volcanic hotspot.