While scanning older data from a telescopic survey of the sky, astronomers discovered a very interesting object: Called 2014 UN271, it’s a giant chunk of ice and rock that normally spends its time far, far out past Neptune, but is now heading into the solar system, and will get about as close to the Sun as Saturn over the next ten years!

To be clear, a lot of new comets we find dip pretty close to the Sun after spending millennia out there in the black, but this one is different for quite a few reasons.

One is how ridiculously elongated its orbit is: It goes from about 1.6 billion kilometers from the Sun (just outside Saturn’s orbit*) to a mind-numbing 2 trillion kilometers out. That’s a fifth of a light year! From that distance the Sun’s gravity is so weak a whisper could push this thing into interstellar space.

Another is its size. A big comet might be 50 kilometers wide (the size of the famous Hale-Bopp comet which visited the inner solar system in the 1990s). This one may be — and I’m still reeling from this — a staggering 200 kilometers wide. 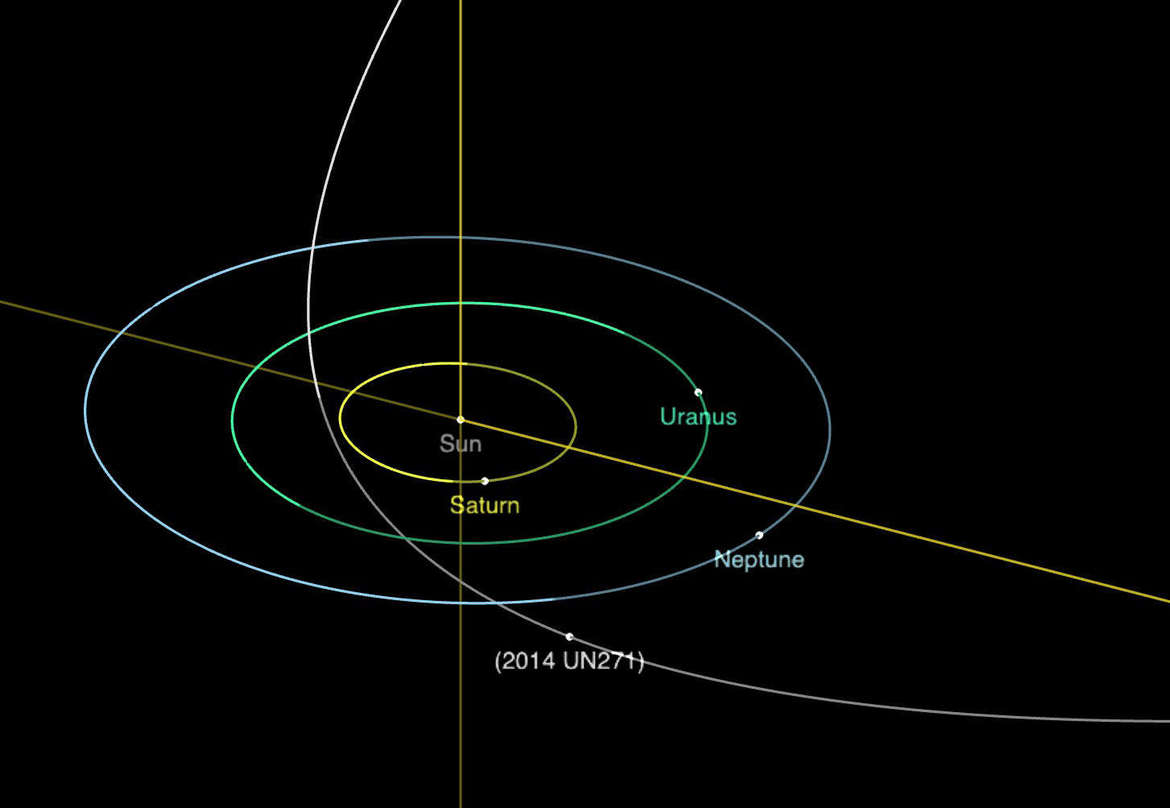 The orbit and current position (in 2021) of the newly discovered megacomet 2014 UN271. The orbit is tipped over 90° to the plane of the planets, and it gets about as close to the Sun as Saturn. Credit: NASA/JPL-Caltech

2014 UN271 was found in data from the Dark Energy Survey, an enormous project to map about 1/8th of the entire sky over several years. The main mission of the survey is to map out hundreds of millions of galaxies and thousands of supernovae to understand better the shape, size, and expansion of the Universe.

However, it can also see some things significantly closer to home, like solar system bodies. These move very slowly from one night to the next, and software can be written to look at images taken at different times to search for moving objects. The first known image of 2014 UN271 was in 2014, so it was back-named to that date.

The discovery was announced on June 19, 2021, and even since then the orbit has been updated a few times. I’m using the latest numbers from the JPL Minor Planet Database here. But generally speaking, the orbit is very long and the object very big.

Pedro Bernardinelli, one of the astronomers on the team, posted this image of it, a combination of several images taken over years.

[His comment in the tweet is that no outgassing is seen from it yet; more on this below.]

2014 UN271 is what we call a Trans-Neptunian Object, or TNO. This is a class of objects that orbit the Sun out past Neptune, and come in a variety of shapes, sizes, orbits, and so on. Some are quite big. Pluto is technically the largest we know of, at about 2,400 km wide (the distance from Denver to Washington, D.C.). Many found are in the 100 – 1,000 km range, but these objects are so far away we’ve only found a handful of the trillions of them that are out there. 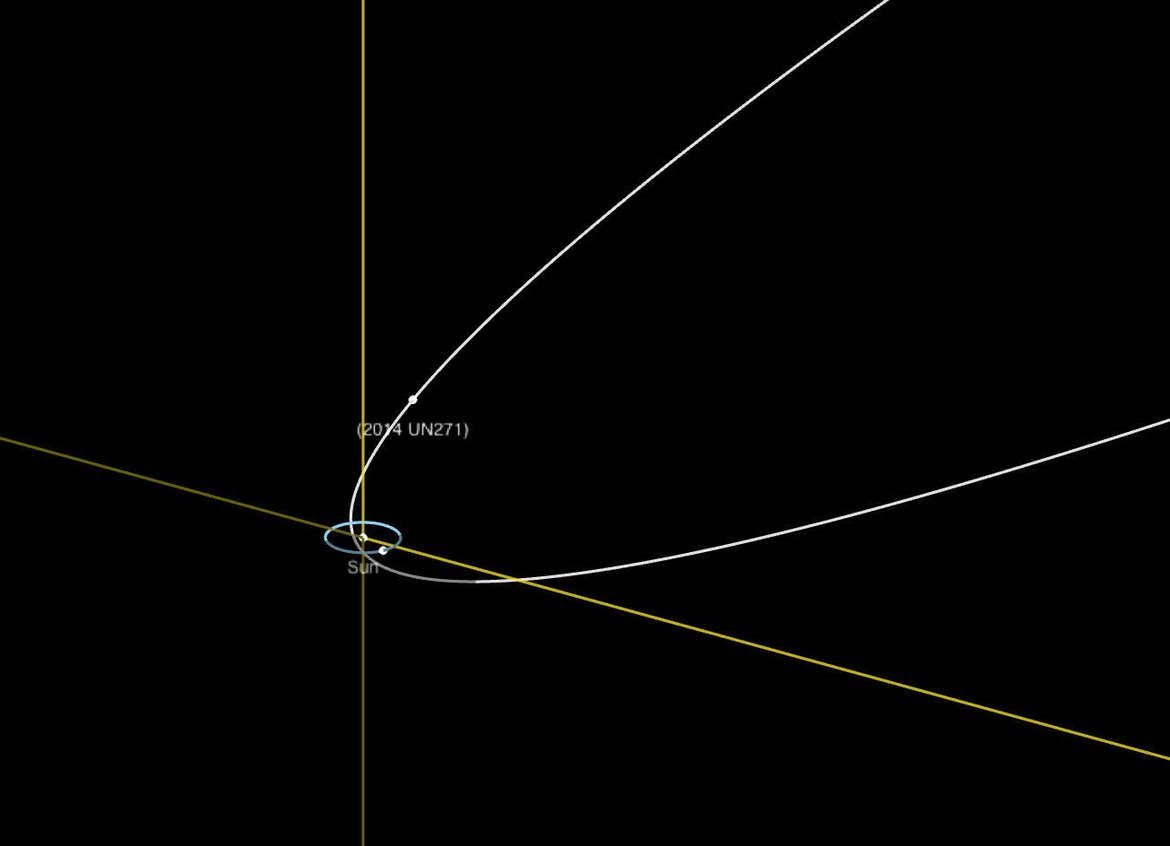 A wider view of the orbit of 2014 UN271, showing it compared to the orbit of Neptune. Its orbit stretches roughly two trillion kilometers out from the Sun, but gets as close as about 1.6 billion. The position marked is where it will be in the year 2200. Credit: NASA/JPL-Caltech

2014 UN271 spends most of its 600,000-year or so orbit hundreds of billions of kilometers from the Sun, and the only reason it was found at all is because it’s only about 3 billion km away from us right now, roughly the distance of Neptune from the Sun. That’s how its size was found as well. For a given brightness we see at Earth, a shiny object is smaller and a dark one bigger. If we assume it reflects 4% of the sunlight hitting it (reasonable, since that’s a decent average for TNOs) it’s 200 kilometers wide. But it might be darker and bigger, or more reflective and smaller. We’ll know better in the next few years.

We don’t know what this object is made of exactly, but given what we know about TNOs, it’s likely a mix of water ice and rock, plus other frozen things like carbon dioxide, methane, nitrogen, and the like. It’s too small to be round; its gravity’s too weak to crush itself into a sphere (the smallest known object like that in the solar system is Saturn’s moon Mimas, at 400 km wide), so it’s very likely irregular in shape. 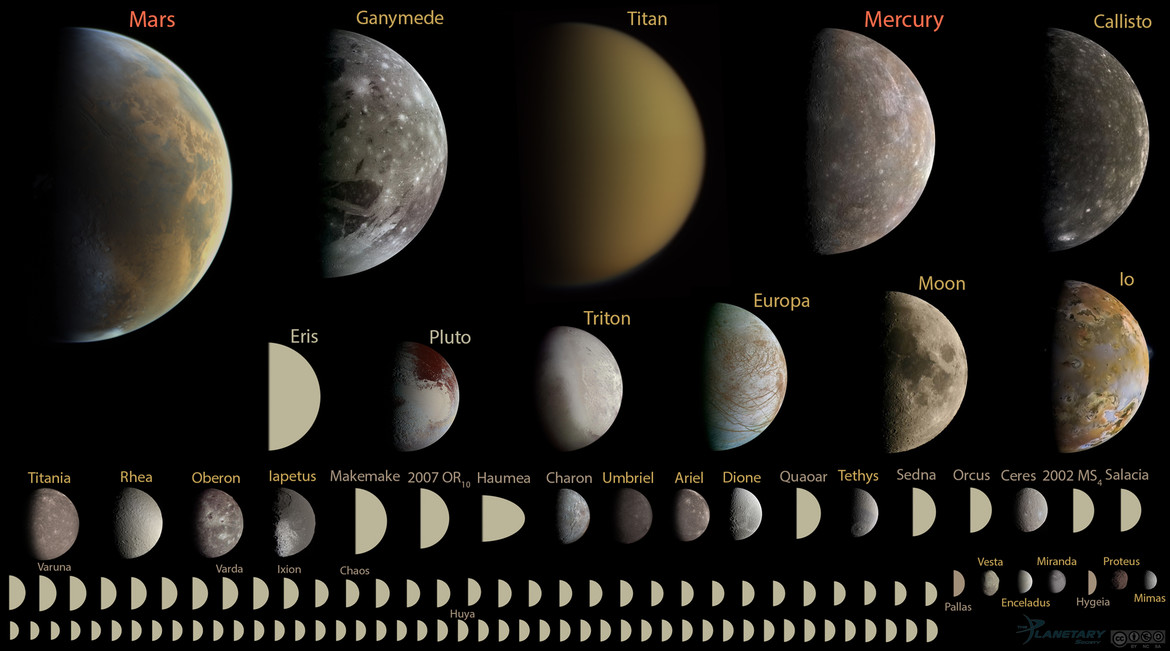 So it’s more like a really Brobdingnagian comet than a teeny planet. Which makes me wonder: Will it act like a comet? I mean, will we see activity from it as it nears the Sun, with ices turning into gases so that it develops a fuzzy head and long tail? It might, since we’ve seen activity from other objects that get as close as this one will.

Given its size, if it does start to get busy, it might get much brighter. Without activity it should get to about magnitude 18 at closest approach, which is still 1/100,000th as bright as the faintest star you can see by eye. It’ll take big telescopes to see it. But if it gets active, well, we’ll see.

And I wonder: It makes its closest approach in early 2031. That’s soon, but perhaps enough time to get a probe together to send to it. The European Space Agency is building a mission called Comet Interceptor that is specifically designed to look for comets coming from deep space that are on their first inbound trip to the inner solar system (like Comet Borisov from 2019). This one has dipped down many times over the past few billion years, but I wonder if ESA will make an exception for it? We’ve never had a chance to see anything like this up close before. Some moons of the outer planets look like captured TNOs, but they’ve certainly been altered over the eons by their host planet and proximity to the Sun. Seeing a new TNO this size up close and for an extended visit would be extraordinary.

I expect we’ll get lots of images of it soon (at the moment, unfortunately, Hubble is off-line, so hopefully the bigger ground-based ‘scopes can get a look). They’ll just be dots, even when it gets closer over the next decade, but there’s a lot we can learn from a dot. Stay tuned!