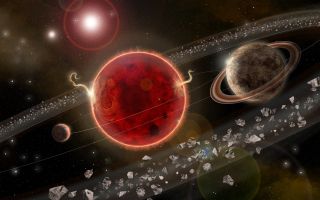 An artist’s illustration of the Proxima Centauri planetary system. Portrayed on the right is the newly discovered exoplanet candidate Proxima c, which orbits the red-dwarf host star once every 5.2 Earth years. The system also includes the smaller Proxima b, on the left, a confirmed world that was discovered in 2016.(Image: © Lorenzo Santinelli)

Proxima b may not be an only child after all.

In August 2016, astronomers announced that a roughly Earth-size exoplanet circles the closest star to the sun, the red dwarf Proxima Centauri, which lies a mere 4.2 light-years from us. (For perspective, the Milky Way galaxy’s spiral disk is about 100,000 light-years wide.)

That world, called Proxima b, orbits in Proxima Centauri’s “habitable zone,” the just-right range of distances from a star where liquid water could be stable on a world’s surface. So, there’s a chance that life as we know it may have taken root in the next solar system over from us. (How good that chance is remains a matter of considerable debate, however. For example, Proxima b is tidally locked to its host star, meaning it has a hot dayside and a cold nightside. And red dwarfs are very active stars, so powerful flares may have stripped the planet’s atmosphere long ago.)

Proxima b’s discoverers analyzed “radial velocity” data gathered over multiple years by instruments called HARPS (High Accuracy Radial Velocity Planet Searcher) and UVES (Ultraviolet and Visual Echelle Spectrograph), which are installed on telescopes operated by the European Southern Observatory (ESO) in Chile. The scientists noticed that Proxima Centauri was being tugged slightly by the gravity of an orbiting planet: Proxima b.

The team, led by Guillem Anglada-Escudé of Queen Mary University London, didn’t see any signs of other worlds orbiting the red dwarf at the time, but they couldn’t rule that prospect out. And now, a new study reports that the closest exoplanet to Earth may indeed have a companion.Click here for more Space.com videos…CLOSEVolume 0%This video will resume in 12 seconds PLAY SOUND

In the new study, which was published online today (Jan. 15) in the journal Science Advances, a team led by Mario Damasso and Fabio Del Sordo (and including Anglada-Escudé, who’s a co-author) re-examined the old HARPS and UVES observations, along with a series of new HARPS measurements.

The researchers subjected the data to new analyses that tracked Proxima Centauri’s light spectrum over time, looking for regular oscillations that could betray the presence of an undiscovered planet. (Damasso and Del Sordo also presented their results at the Breakthrough Discuss conference in Berkeley, California, last April, before the paper had been accepted for publication.)

There was a lot of information to go through; the combined HARPS and UVES measurements spanned about 17.5 years.

This painstaking work unearthed a possible planet called Proxima c, which is at least 6 times more massive than Earth and may therefore be a type of world known as a super-Earth. Proxima c completes one lap around Proxima Centauri every 5.2 Earth years, making it a poor prospect for life as we know it.

“Given the low luminosity of the host star and the orbital radius of the planet, it receives a very low insolation,” said Damasso, who’s based at the Astrophysical Observatory of Turin, which is run by Italy’s National Institute for Astrophysics.

“A simple estimate of the equilibrium temperature gives T~40 K,” Damasso told Space.com via email. (Forty degrees K, or Kelvin, is equivalent to minus 388 degrees Fahrenheit, or minus 233 Celsius.)

But Damasso and Del Sordo both stressed that habitability is a difficult topic to address, given the many factors that go into it and the paucity of information available about most exoplanetary systems. For example, to gauge a world’s true life-supporting ability, you’d need to know how thick its atmosphere is and what the air is made of, as well as how active its star is (as the Proxima b example shows).

In addition, worlds that don’t lie in the traditional “habitable zone” may still be able to harbor life as we know it. After all, the Jupiter moon Europa and Saturn satellite Enceladus are covered by icy shells, but both possess huge subsurface oceans of liquid water.

In addition, the habitability talk generally assesses a world’s suitability for Earth-like life, and there’s certainly no guarantee that aliens in other systems share our biochemistry.

“I am convinced there are so many unknown scenarios to be discovered about planetary features that go beyond our imagination,” Del Sordo, who’s based at the University of Crete, told Space.com via email. “But at the moment this conviction has nothing to do with science; it is only my personal point of view.”

“According to our study, if Gaia will deliver the data with the expected quality, and in the absence of any unknown impediment, the detection can be reliably confirmed or dismissed,” Damasso said.

The study team is also assessing how additional HARPS and UVES data might aid the confirmation effort, he added. In addition, the researchers are considering searching for Proxima c via direct imaging — in particular, in photos captured by SPHERE (Spectro-Polarimetric High-contrast Exoplanet REsearch), a tool installed on ESO’s Very Large Telescope in Chile.Advertisement

“This is really a challenging task, almost impossible for a blind search with the present capabilities, but having details about the candidate’s orbit can help looking for the planet’s reflected light in the right places,” Damasso said.

The difficulty of directly imaging Proxima c means that the lack of a detection by SPHERE would not be a significant strike against the candidate planet’s existence, Del Sordo added. And the team’s data do suggest that it’s probably there, waiting to be found.

“According to our calculation, at the moment the two-planet model is five times more probable than the one-planet model to explain the data,” Del Sordo said. “It means it is 83% probable planet c exist[s]. Of course, follow-up will be crucial, as Mario said.”